Because I am a wuss and was too chicken to actually phone in with my feedback, anyone who listened to the Forgotten Flix Labyrinth Podcast now thinks I talk like some kind of simpleton. Thanks for that, Joel. I hope you’ve framed your diploma from the Don Cheadle School of Accents and hung it somewhere prominent.

Sitting here with my head in my hands at the sound of our esteemed host’s Mockney Cockney, I can’t ignore the fact that his fake accent isn’t the worst I’ve ever heard*. Some of the worst crimes against cinema have been committed by actors mistaking ‘accent’ with ‘acting’ – here are my favourite five.

*Don’t get me wrong, it’s right up there in terms of terrible accents, it’s just not the worst I’ve ever heard. Actually, Sean’s biggest crime is that he doesn’t even try to do different accents. His Irish copper, his Egyptian/Spanish Immortal Swordsman, his Russian submarine Commander… all of those characters sounded remarkably like they’re from Edinburgh.

Maybe the reason he doesn’t give the accents a go is because he realized how rubbish his attempt at Irish in Darby O’Gill and the Little People really was. Ah, wee Tommy O’Cruise in Far and Away. Or, as I like to call it, The Ridiculous Scientologist  and His Ridiculous Accent in That Ridiculous Film Directed By Richie Cunningham off Happy Days Which Is Just Ridiculous.

There are few actors that make me as angry as The Cruiser, because sometimes, when the sun is in the fifth moon of Sagittarius and all the planets are correctly aligned, he’s a very, VERY good actor.

I love him in Interview with a Vampire; Magnolia is brilliant; and his biceps are very appealing to look at in Mission Impossible 2.  But Far and Away is just horrible. I know many Irish people, and NOT ONE OF THEM talks like this – in all fairness Kidman’s fairly shit as well, but she’s somehow less offensive than Tom.

In hindsight, perhaps the problem was that in 19thCentury rural Ireland, there were no airports for him to run through in slow-motion.

Oh Ray. You’re another one – when you’re good you’re very very good and when you’re bad you’re painful. (actually, I think you’re just ok. Other people love you but I’m a bit ‘meh’… apart from your cameo in Martha Meet Frank Daniel and Laurence).

It’s a toss-up as to which movie his accent is worse in: Cold Mountain or Fool’s Gold. Both feature terrible approximations from the Southern States: Fool’s Gold actually made me hoot with laughter.

On the whole though, I think he’s more offensive in Cold Mountain, because I do love that movie – I can’t watch it very often because I cry for a week after the credits roll – and everyone else is so good in it, especially the cameos: Donald Sutherland! Eileen Atkins! JAMES FRICKING GAMMON!

A slice of British humour for you here:

Keanu, god love him, is nearly always bad onscreen, especially when you ask him to play a character who isn’t Ted ‘Theodore’ Logan… although I’ll make an allowance for Much Ado About Nothing, mainly because Kenneth Branagh only gave him about 2 lines, and the rest of the time he just had to stand there and look pretty.

I wish Francis Ford Coppola had had the same wisdom when making Bram Stoker’s Dracula. 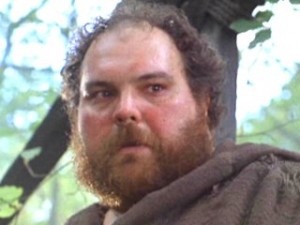 Most people immediately pick upon Kevin Costner’s attempt at English as being the worst thing in Robin Hood: Prince of Thieves, but I found Friar Tuck’s rambling dialectic tour around Britain far more insulting.

He started off with quasi-country bumpkin kind of noise, pissed off to Ireland for a bit, forgot where he was and did American for a couple of scenes, before ending the whole shebang with a bit of Cornish.

I found his turn as a perverted judge in Drop Dead Gorgeous far more convincing.

So there you have My Top 5. Tell us yours in the comments section!