by Jason Pyles (aka “Jay of the Dead”)

Editor’s Note:  For this installment of Forgotten Flix’s Top 10 we’ve asked horror guru and podcasting journeyman Jason Pyles to give us the Top 10 Slasher Films of the 80s.  We loved Jay’s article.  In fact we loved it so much we couldn’t cut anything out, so broke it into two posts.  This is the second part of Jason’s list.  Check out 6-10 on yesterday’s post.

Content Advisory: These movies are for serious horror lovers, so even the descriptions can get a little dicey.  If you are a real glutton for punishment check out some of the trailers on YouTube…*shudder.*   Parental (and intestinal) discretion is advised. 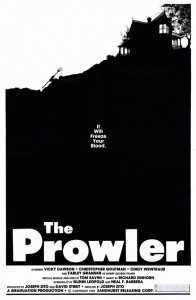 5. The Prowler (1981) – Almost everyone recognizes the titles of the classics like Friday the 13th (1980) and John Carpenter’s Halloween (1978), but only true horror fans are acquainted with second-tier slashers like The Prowler. The Prowler ranks among my top 10 because to me, it is the quintessential ‘80s slasher flick, typifying the sub-genre and representing its best-loved conventions. You’ve got a masked killer wearing World War II-era military fatigues and terrorizing a sleepy New Jersey town while wielding a pitchfork and a bayonet blade. Makeup master Tom Savini has been quoted as saying this film showcases his best work and one can see why.  There are a couple of unforgettable kills involving a blade being run down through a man’s skull and exiting his chin, and another scene in a swimming pool where the killer saws into a woman’s neck, which I think actually eclipses the famous throat-slit scene in Friday the 13th. Gruesome. Pitchforks are inherently scary, regardless of the context in which they appear, but it’s especially chilling to see one used to administer death. 4. The Burning (1981) – In 1981, the brothers Weinstein gave us a noteworthy campfire tale with a killer named “Cropsy,” a one-time summer camp groundskeeper who is severely burned after a prank goes south. Five years later, Cropsy returns to exact his revenge with a huge pair of garden shears. The Burning is most effective in its ability to misdirect the audience and defy our expectations with a vast disparity between what you think will happen and what ends up happening. But my complaint in this movie is that it has a lot of fake-outs with a long drought of kill scenes. Another detractor (which isn’t the film’s fault) is the distracting presence of Jason Alexander, who will evermore be George Costanza to me. Otherwise, The Burning is one of the great ‘80s slasher flicks. It features Tom Savini on special makeup and effects. 3. Intruder (1989) – Perhaps the last great ‘80s slasher flick of the decade, Intruder is the most fun slasher I can think of, which is why I have ranked it at No. 3. Premise: The night shift at a small town grocery store is preyed upon by a resourceful killer, who creatively uses various grocery store items to execute victims. Here is an ambitious horror movie that straddles campy fun with artistic innovation. There are many attempts at creative camera angles, such as a shot where we (identifying with the camera’s perspective) peer up through a floor while it’s being mopped. Several interesting cinematographic flares like this one are admirable, but ultimately distracting. Intruder has all practical effects (done by Greg Nicotero and company). The crowning kill involves a table saw cutting a victim’s head in two. Crazy. Intruder also features the Raimi brothers in small roles and a brief appearance by Bruce Campbell.

2. Maniac (1980) – Joe Spinell, who co-wrote and stars in the titular role, plays Frank Zito, a serial killer whose child abuse results in his own personal war on upon the women of New York City. Upon murdering his victims, this maniac collects their scalps and places them on the numerous mannequins that inhabit his apartment — mannequins that he talks to regularly. Spinell gives an uncommonly nuanced performance for a horror film, always moaning and groaning to himself, and breathing heavily. Speaking of Zito’s apartment, be sure to notice the care given to the creepy set design, which helps bring us into the killer’s twisted world. The great effects master Tom Savini gives us a Top 10 Best Horror Kill Scene in Maniac, where Savini himself plays a victim who gets his head blown off with a shotgun. My only complaint overall is the movie’s overly drawn-out pacing for the suspense sequences; otherwise, it’s nearly a horror masterpiece. 1. Pieces (1982) – This obscure gem from Spain combines practical effects and utter brutality for a memorable, must-see horror experience. Its tagline is “You don’t have to go to Texas for a chainsaw massacre.” The film opens with a boy getting busted by his mother for assembling a nudie jigsaw puzzle. She smacks the boy around, so he sinks an ax into his mom’s cranium (and it shows it). Next he saws her apart with a hacksaw. And that’s just the curtain-raiser for Pieces.  The remainder of the film takes place decades later when this same boy, now an adult, stalks girls on a college campus in Boston. As with most slasher flicks, the performances aren’t the best, but Pieces is a sleazy gore film whose style is notably reminiscent of the 1970s slashers.

Jason Pyles (Jay of the Dead) has worked as a film critic for the past seven years, contributing to the assessment and analysis of cinema through various media, including newsprint, online, and podcasting. Jason currently hosts Movie Podcast Weekly, a new podcast released every Monday, where the hosts review a film that’s newly released in theaters. Jason also hosts Podcasting Revolution a weekly podcast about NBC’s new television show, “Revolution.” Jay also contributes his “Blue Moon Zombie Reviews” audio segment occasionally to the Zombie Reckoning Podcast, which is part of the Horror Palace Network. Jason previously hosted the Considering the Sequels Podcast, The Weekly Horror Movie Podcast and another podcast called Horror Metropolis.  He can be reached at MoviePodcastWeekly@gmail.com or on Twitter at @MovieCastWeekly.