So, ladies and gentlemen, we’ve, once again, reached the Christmas holidays and what better way to spend it than in the company of a good fairytale? Well, a good fairytale is good company any time of the year, but especially around Christmas, I think. Or if you’re feeling sick or under the weather… which is the case with the little boy at the start of the movie. He’s sitting in his bed playing a videogame when his mother comes in to tell him his grandfather has come over with a little present to make him feel better. The boy eagerly tears off the wrapping and finds… Time for a story…

Grandson: Has it got any sports in it?

Grandpa: Oh, well, thank you very much, very nice of you. Your vote of confidence is overwhelming.” And thus starts our main story… the story of a young woman, Buttercup, and the farm boy Westley. They live on a farm in the kingdom of Florin and she spends her time ordering him around and all he ever says is “As you wish!” After a while she realizes that what he really means by that is “I love you!” and she soon discovers that she loves him too. For them to be able to marry, Westley must go out into the world to seek his fortune and Buttercup wonders if she shall ever see him again. Westley says that nothing can keep true love apart, but sadly his ship is attacked by the Dread Pirate Roberts who, notoriously, takes no prisoners. Believing Westley to be dead, Buttercup is heartbroken and vows never to love again.

Five years later she is (reluctantly) engaged to be married to Prince Humperdinck, who, as the heir to the throne, can choose any woman in the kingdom to be his bride. This is where the grandson interrupts the story and tells his grandfather no, that can’t be right… she’s supposed to marry Westley, right? Not the Prince! The grandfather knowingly asks… so you ARE a little bit interested in the story after all, huh… despite “the kissing parts”?

And this is another thing I love about this movie, the small interruptions from these two, played by Fred Savage (Little Monsters, The Wonder Years) and the brilliant Peter Falk (The In-Laws, Columbo, Murder by Death) as the grandfather. It reminds me of when my two youngest daughters interrupt me, to ask questions, when I’m reading to them. I think I’ve told you before about my life-long love of books, the classic stories and fairytales, and I love the storytelling aspect of The Princess Bride, which might be one of the reasons it has a special place in my heart.

You know, a thought just occurred to me… maybe, just maybe, this movie is one of the reasons I love reading to my kids, or telling stories in general. I like being the storyteller! One morning when Buttercup is out riding, she’s kidnapped by three men… the giant Fezzik, the master swordsman Inigo Montoya and Vizzini, the short obnoxious man who’s the brain of the outfit. They make it look like she’s taken by soldiers from the neighboring kingdom of Guilder, so as to start a war. Well, actually it’s a little bit more complicated than that, but we won’t go into this here. They board a small boat and set sail for the Cliffs of Insanity (don’t you just love that name?). After a while they discover that they’re being followed by a man in black. Fezzik pulls them up to the top of the cliffs and then Inigo stays back to face the black-clad man in a mighty duel. They’re both very skilled in the art of fencing, so it really is a spectacular bout.

Inigo Montoya is played by an actor I’ve always liked, namely Mandy Patinkin. You might recognize him from TV-shows such as Chicago Hope, Criminal Minds or Homeland. The actor portraying the man in black/Westley is Cary Elwes from Glory or Robin Hood: Men in Tights for instance. And by the way… it’s pretty obvious that the man in black and Westley are one and the same, so I’m not spoiling anything. Both actors trained fencing vigorously, so it would look real and it actually is them doing the fencing, not stunt doubles.

Vizzini… you know, the smart one, is played by Wallace Shawn from She’s Out of Control or the Toy Story movies, where he did the voice of Rex. The gentle giant, Fezzik, was played by a very prolific man… André Rousimoff or as he was known in the wrestling world, André the Giant. He suffered from acromegaly, which is why he grew to be as large as he did. It unfortunately also caused him a lot of trouble such as, for instance, a very bad back and he had to endure several operations.

My kid brother and I have always been huge wrestling fans… in fact, I think he still has a few action figures in a box somewhere, and André the Giant was one of our favorite wrestling stars. I still vividly remember Wrestlemania III in 1987 and the legendary title match between André and Hulk Hogan.

From what I understand from interviews and what I’ve read, André was a very intelligent and extremely sweet man. On the special edition DVD I have, there is a featurette wherein the actors talk about him and it’s quite apparent that he was very well liked around the set and that he left a huge (no pun intended) impression in their hearts. Call me a big softy if you like, but it kind of made me a bit misty-eyed. André Rousimoff passed away from heart-failure in 1993… He was only 46 years old. 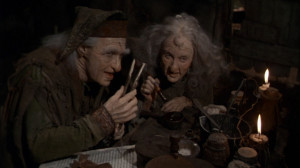 But let’s get back to the story, shall we? Chasing after both the three kidnappers and the man in black/Westley are Prince Humperdinck, played by Chris Sarandon (Fright Night, Child’s Play) and his right hand man Count Rugen, played by Christopher Guest (This is Spinal Tap, Best in Show). They’re close behind and eventually catch up with them! Westley is captured and thrown into the Pit of Despair where he is to face torture for the rest of his life and Buttercup is once again facing marriage to the prince. Hey, no-one ever said True Love was a cinch!

Buttercup is portrayed by the beautiful Robin Wright (State of Grace and the TV-show Santa Barbara) and apart from the actors I’ve already mentioned, you’ll also see other recognizable faces in smaller roles. There’s for instance Mel Smith from Alas Smith & Jones and Not the Nine O’Clock News as the albino and Peter Cook (Yellowbeard, Whoops Apocalypse) as the priest. You might also recognize Carol Kane (Racing With the Moon, Scrooged) as Valerie, the wife of the wizard, Miracle Max, who’s played by Billy Crystal. You know? From SOAP, Running Scared, Throw Momma From the Train, City Slickers, When Harry Met Sally… need I go on? The screenplay for The Princess Bride was written by William Goldman based on his own book and it was directed by Rob Reiner. Mr. Reiner is also responsible for the abovementioned This is Spinal Tap and When Harry Met Sally as well as Misery and Stand By Me to name a couple. The beautiful music was composed and performed by the prolific Mark Knopfler.

Now, I realize that to some of you, The Princess Bride isn’t a forgotten flick per se, BUT… the fact of the matter is that right now, in the year 2013, this movie is 26 years old and I suspect many of today’s generation have never seen it, which is a damn shame! The Princess Bride is a classic fairytale in every sense of the word and as the grandfather says at the start of the movie, it basically has all the necessary ingredients and I, as you’ve probably figured out by now, absolutely love it!

And that, ladies and gentlemen, is the end of my last review for this year. I hope you enjoyed it, even though it ended up being a bit lengthy and now there’s only one thing left for me to say, and that is… I hope you had a Merry Christmas and I’d like to wish you all a Happy New Year!

Take care, my friends… and stay safe! See you next year!