This week I’m taking a look at the second movie on the drive-in double feature DVD that I mentioned last time. The Glove was actually the main reason for buying it, because A: I’ve never seen it, and B: the awesome cover art!

I remember seeing the VHS cover way back in the day as a teen, but for some reason I never watched the actual movie. I don’t think I saw the physical tape on a shelf in a video rental store either, but instead saw the image in a movie magazine of some sorts and stored it away in a dark corner of my brain, for later reference.

I think I’ve told you this before, but I’m a huge fan of poster and cover art and love looking at old VHS covers. (Don’t judge me!) A while back, I was browsing through scanned images on a site devoted to this art form and I happened across the cover for The Glove, and I wondered if the movie was available to buy anywhere? To make a long story short, it was…

which brings us to today and this week’s review! The Glove was actor Ross Hagen’s directorial debut and apart from that one he only has 7 other director credits. As an actor he’s appeared in movies such as Avenging Angel and Alienator to name a couple.

The Glove stars the prolific actor John Saxon as Sam Kellog, a bounty hunter who seems to be more or less broke all the time. I’m sure you’ll recognize Mr. Saxon from Enter the Dragon, Hands of Steele, Black Christmas and A Nightmare On Elm Street.

Sam Kellog is a soft spoken man who’s not really into the violent side of his job. I mean, he can dish it out if need be, but he prefers to use his brain. Because of this he only handles smaller cases that doesn’t pay very much, which is why he’s basically always out of money. His ex-wife hounding him with unpaid alimony and threatening to take his daughter away if he doesn’t pay up, isn’t helping his situation much either. He’ll soon get a chance to collect a large reward though! All he has to do is to find and bring in a man by the name of Victor Hale. It sounds easy, doesn’t it? Yeah, well… think again! The stripping of a car!

The movie starts with a prison guard getting picked up from work by his mistress. Since her husband is due home soon they decide to park the car on an empty lot for a little backseat action. Yeah, I know… not the most romantic setting, but hey… if you gotta go, you gotta go, right? Unbeknownst to them, they’re being watched by a big-ass dude who’s clad in some sort of padded, black leather outfit and wearing a black motorcycle helmet. He violently attacks the guard and proceeds to beat the crap out of him, and basically rips the car to pieces in the process.

It’s almost like he has superhuman strength, and his weapon is one of those notoriously nasty “riot gloves” that was supposedly used by law enforcement personnel during the 70’s. And let me tell you, that is one scary looking glove! You just know it’s going to hurt like hell getting hit with it. 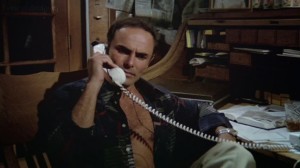 “So… what are you wearing?”

The man in black is Victor Hale and is played by Roosevelt Grier who’s known from movies like The Thing With Two Heads, Skyjacked and lots of TV-work. Mr. Grier is a former football player and used to play for L.A. Rams in the 60’s. He’s also the cousin of none other than the gorgeous Pam Grier (Coffy, Class of 1999, Jackie Brown, The Arena).

Victor Hale is not your typical homicidal maniac; he’s actually a pretty likeable character who cares about people in his neighborhood. But when it comes to exacting revenge on prison guards, for what was done to him when he himself was doing time, he’s as vicious and brutal as they come! So, you see, Sam Kellog has his work cut out for him and the cat and mouse chase between these two is actually pretty interesting.

Other names in this movie are Jack Carter (Alligator, The Amazing Dobermans) as Walter Stratton, a local gangster whom Sam works for from time to time. Gearing up for a beating!

Joan Blondell (Grease, Support Your Local Gunfighter) is Mrs. Fitzgerald, an elderly lady whom Sam is hired to find and bring back to Walter. Don’t worry, folks… Sam has a kind heart and lets her off the hook!

At Walter’s house, Sam meets a woman named Sheila whom he takes a liking to and the two of them strike up a rocky relationship. In the role of Sheila you might recognize Joanna Cassidy from movies such as Blade Runner or Who Framed Roger Rabbit. The latter starred Bob Hoskins, who very sadly passed away a short while ago.

As Sam’s friend and occasional employer, Bill Schwartz, I’m almost positive that you’ll recognize Keenan Wynn. The man has more than 270 credits to his name, including Black Moon Rising, Orca (The Killer Whale) or The Shaggy D.A. to name just a small handful of titles.

As I mentioned before, this was my first viewing of The Glove and I must say that I liked it… a lot actually! It has a nice gritty 70’s feel to it and a great soundtrack too. The cast is good, I’ve always liked John Saxon and Keenan Wynn, and Roosevelt Grier strikes an impressive figure.

This is not your standard good guy vs. bad guy type of movie, because both Sam Kellog and Victor Hale are stuck somewhere in the middle, which raises the movie a notch or two above others in this genre. Don’t get me wrong, we’re not talking Oscar worthy material here, but hey… I didn’t expect that either going into it. I was pleasantly surprised though!

And this is where I’m going to finish this week… I’m quite pleased with my purchase of the drive-in double feature DVD, because both Search and Destroy (which I reviewed last time) and The Glove are movies I’m going to re-visit again in the future.

Do you have any thoughts on my choice this week? If you do, please share them with me in the comment section below!