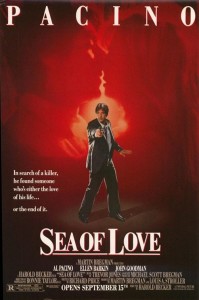 Sea of Love premiered in December 1989 here in Sweden. I saw it in the theater in early- or mid-January 1990… I think! It might have been a little bit later. My memory is a bit fuzzy because, you know… it was almost 25 years ago! I was on a double-date with my girlfriend at the time and my good friend Jonas and his date. My girlfriend and I were in the “ending-stage” of our relationship and things were a bit frosty. We broke up shortly after. I don’t remember much about the night itself, but I do remember liking the movie very much! I’ve seen it a couple of times since then, but it has been a while since the last time.

So, the other day I decided it was finally time for a re-watch, to see if it would still hold up. I’ll tell you if it did in a couple of minutes.

Sea of Love was directed by Harold Becker, who’s also done Mercury Rising and Domestic Disturbance. For Sea of Love, he went for a kind of film noir-look and feel, both with the musical score, and in the way he shot the movie. It’s set in New York City, and Becker wanted the score to emphasize that.

And you know what? In my opinion he was very successful in doing just that! Sea of Love, playing over and over…

As soon as the opening credits begin and that jazzy instrumental tune starts, the movie feels very “New York City-ish”. In fact, the musical score is great throughout and I just loved it. It was done by Trevor Jones (Dark City, Mississippi Burning, Arachnophobia). Oh, and the use of the oldie, “Sea of Love” by Phil Phillips and The Twilights..? Brilliant! It’s a great song by the way. It’s even used when the end credits are rolling, but this time in a slightly different version sung by Tom Waits. It’s still good though! Al Pacino, from Scent of a Woman, Scarface, Serpico and Dog Day Afternoon, plays Frank Keller, a New York City police detective with 20 years on the force. He’s an alcoholic, who’s more or less burnt out. His wife divorced him and married one of his colleagues. So to say he’s bitter would probably be the understatement of the year.

He’s working a case where a man has been shot while lying naked and face down on his bed. The record player in the apartment is playing an old 45 of the song “Sea of Love” over and over again.

A second man is found dead under the same circumstances in another precinct and the detective assigned to the case there, Sherman Touhey, suggests that he and Frank work together on it. Detective Touhey is played very well by John Goodman (Arizona, Junior, Arachnophobia).

What the detectives have to work with is a set of fingerprints and the fact that both victims placed rhyming ads in a lonely hearts column in a newspaper. Frank and Sherman decide to put their own ad in the paper and set up dates with the women who respond. Their plan is to buy them a drink or two to get their fingerprints and see if they match the set found at the two victims’ apartments. Helen and Frank having a late night drink

This is where we’re first introduced to the stunningly beautiful Ellen Barkin (Johnny Handsome, The Adventures of Buckaroo Banzai Across the 8th Dimension). She plays a divorcee named Helen Cruger who isn’t too comfortable with the situation and doesn’t feel any “connection” between Frank and herself, so she leaves the restaurant before they can get her prints.

Later, Frank bumps into her at a local market and they start talking again. This time they’re more honest and relaxed. Perhaps, this is because back at the restaurant it was more “staged”, so to speak. Frank calls Sherman and informs him of what he’s doing and Sherman basically asks him if he’s fucking nuts! She’s a friggin’ suspect! And could he at least wait until the other prints come back from the lab?

Sea of Love is a superb thriller. Better than I remembered, actually. It’s beautifully shot and the cast is absolutely amazing. Al Pacino, in particular, shines as Frank Keller. He did Scarface in 1983 and Revolution in 1985, but the latter was a box-office failure, so Sea of Love was considered to be somewhat of a comeback for him. Ellen Barkin and John Goodman are equally brilliant, but the great cast doesn’t stop there. There’s also Michael Rooker. You know, Merle Dixon from The Walking Dead? He was also in Henry: Portrait of a Serial Killer and Cliffhanger to name just a few other titles. Awkward discussion between Gruber and Frank

In the role of Gruber, the cop who married Frank’s ex-wife, we see Richard Jenkins (The Witches of Eastwick, Flirting with Disaster). There are actually a couple of funny scenes between Gruber and Frank because Gruber just wants Frank to get off his back. Of course, Frank takes every opportunity to get in his face about the fact that he “stole” his wife, when in reality it was Frank’s own fault that she left.

In a small part as Frank’s dad, you might recognize William Hickey. Maybe you’ve seen him in Prizzi’s Honor or The Name of the Rose or in National Lampoon’s Christmas Vacation where he played Lewis. He’s a fantastic actor!

The acting is, as I mentioned earlier, great. And the dialogue between the different characters feels very natural, not like memorized lines at all. It feels real, you know? This is who they are. Real people. And that’s what makes Sea of Love stand out from many other movies in this genre, or any genre for that matter. So, if you haven’t seen Sea of Love before… please do! I don’t think you’ll be disappointed.

And that’s it for me this week.  Oh, hang on… wait a second here… I almost forgot! In one scene at the start of the movie you’ll notice a guy in a red shirt and cap, but if you blink, you’ll miss him. He’s listed in the credits only as “black guy” but it’s actually none other than Samuel L. Jackson.

And NOW I’m done! Until next time, my friends… please tell me your thoughts in the comment section below.