How to Plan the Perfect Movie Marathon 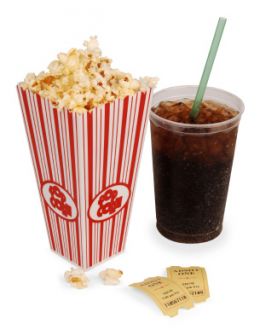 So.  It’s Saturday.  The weather’s rubbish and you haven’t got the energy to go out.  The perfect conditions to plan yourself a cheeky little movie marathon.

It’s easy to mess up Movie Night.  The wrong choice of films, the wrong food, the wrong lighting… all of these can mess up your weekend…. OK, that’s maybe over-exaggerating slightly but hey, give it a little thought and you’re well on your way to a top night.

First thing you need to do is decide what you’re actually going to watch.  Ideally you should be looking at 3 films maximum, and if you’re geeky like me going with a theme is a great idea.

Obvious choices could be movie trilogies (Back to the Future is a superb choice, or the first 3 Indiana Jones titles… don’t bother with Crystal Skull), or you can go with genre, or a particular actor.  After Patrick Swayze died some friends and I planned a Swayze Memorial Night: Ghost, Dirty Dancing and finishing up with Road House. Better have some cereal or eggs for this crew.

Which leads me to my next point – order of viewing.  Depending on what you’ve chosen, take a long hard look at what you’ve got.  Taking Swayze Night as a point of reference, it would have been all wrong to watch Road House first, follow it with Dirty Dancing and close with Ghost…

Throughout the night we would have been a bit fighty, a bit cheery and then ended the night wailing like banshees (assuming that Ghost makes you cry – it’s only the last 2 minutes that make me cry but then I’m usually sobbing for about 15 minutes after that).  You have to start with a drama/weepie, then segue into a comedy/musical, and hit the home straight with an action/horror.

Or say you’ve planned yourself an 80s-tastic Brat Pack night. You want to start with one of the more serious ones… The Breakfast Club, or St. Elmo’s Fire.  Round 2 has to be Ferris Bueller’s Day Off, and finish with The Lost Boys.

Ok, so you’ve sorted out what you’re going to watch… Now you need to think about what you’re going to eat. Much like your choice of movies, the food aspect of it shouldn’t be underestimated. This may mean you have to leave the house, but only to go to the nearest store. The last thing you want is to be watching Big Night and realise that you’re so hungry you could eat your hands.

The first rule of Movie Marathon Dining is keep it simple. Chips and dips, nachos, quesadillas: you get the idea. Pizza for the Marathon! (Courtesy freefoto.com)

The second rule of Movie Marathon Dining is keep it simple. If you absolutely have to cook, make it something you can just sling in the oven, like pizza.

The best time to eat is generally when you’re on movie number 2. Eat too soon and you’ll be hungry later on. Don’t eat during movie number 3: if you’re going to give yourself nightmares you want it to be because you finished up with The Silence of the Lambs, not because you scarfed a pepperoni with double cheese just before lights out.

Dim the lights, equip yourself with any other kit you may need- tissues if you decided to start with something sad (boys, there’s no shame in admitting you cried at E.T. and no one likes a sniffer), a cushion to hide behind during the grisly bits, your drink of choice, and hit play. Enjoy!

9 comments for “How to Plan the Perfect Movie Marathon”