How I Learned to Forgive George Lucas… And You Can Too! If, like me, you spent your childhood pretending to be Luke, Leia or Han, then Summer 1999 would have been a very dark time for you.

Yeah, you know what I’m talking about.

The teaser poster was so cool – tiny little Jake Lloyd casting Darth Vader’s scary big shadow:  I got goose bumps on the back of my neck the first time I saw it.  The early pictures of Darth Maul: a genuinely scary looking villain – perfect.  I ventured off to the York Odeon with my geeky pals, expectantly waiting to be transported to a galaxy far, far away and relive a rush that I hadn’t felt since seeing Return of the Jedi almost 20 years before.

So it really was a little remiss of George Lucas to serve up to his audiences such a dream-shattering, memory-violating, burning-brown-bag-on-the-porch, just-plain-awful movie as Star Wars Episode 1: The Phantom Menace.  Seriously, George, how could you honestly think that such a terrible pile of toilet was in any way acceptable as a Star Wars movie?

There is nothing good about that movie.  Not a single thing.  The news that it’s going to be out next year in 3-D is only going to throw into even sharper relief how terrible it really is.  But I digress… In 2002, one idle Sunday afternoon, I cast aside my doubts and ventured to the Peckham Cineworld.  What was the second one called, the Clone something?  That’s how much of an impression it made on me – I can’t remember the title, only that it was rubbish and nonsensical.  Mercifully George had got rid of the dreadful double act of Jake Lloyd and Jar Jar, but look at what he gave us instead: the dubious acting talents of Haydn Christenson, and Christopher Lee’s phoned-in portrayal of Count Dooku, arguably one of the least threatening movie villains ever to grace the silver screen.

The final insult came in 2004 when a friend begged me to go and see Episode 3 with him.  I should have known better, but I hated to disappoint, and if I’m honest, I remember making my way to the Brixton Ritzy, thinking “How bad could it really be?”I think we all know the answer to that question.

Don’t Judge a George By His Jar Jar

But to borrow  a line from William Shakespeare, “I come to praise George Lucas, not bury him.”  I’m as angry as the next Wookiee at him for Episodes 1-3, and A New Hope aside, it’s no secret that he is a shockingly awful director (apologies to any American Graffiti fans out there, I’ve tried to like it but it just isn’t happening), however take a look at his Filmography, specifically the films he has produced – there are some absolute gems in there.

Obviously, the Indiana Jones films are in there:  rip roaring, swash buckling bundles of awesome with Harrison Ford in his roguish, handsome heyday (I’m trying my best to ignore the Crystal Skull-sized elephant in the room and just don’t get me started on Kate Capshaw) but there are a handful of other gems with George Lucas’ name attached to them that mean we shouldn’t send him to the metaphorical Rancor cave just yet.

(Also I’m well aware that the brilliance of the Indiana Jones films is totally down to one Steven Allan Spielberg and Lucas was totally riding on his coattails, which admittedly isn’t really helping my argument).

Let’s start with 1981’s Body Heat.  This remake of the excellent Double Indemnity launched Kathleen Turner’s career, and also stars one of my favorite ever actors, William Hurt. Check out the trailer – not a CGI racial stereotype with ridiculous flappy ears to be seen!  (And if you really want a treat, get yourself a copy of Double Indemnity too – it really is fantastic.) 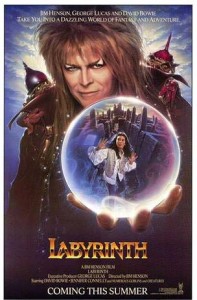 Moving swiftly on, I refer the honourable ladies and gentlemen to what is possibly one of the finest family films ever made, indeed it’s one of Joel’s Must See Movies from 1986: Labyrinth.  Again, most of the credit has to go to Jim Henson, but it’s a Lucasfilm production.  This is just a diamond of a movie: OK,  Jennifer Connolly’s Sarah tends toward slightly annoying, and David Bowie’s tights are nothing short of terrifying (not to mention his wig), but the puppets still make my heart ache with joy 25 years later (my own particular favourites being Sir Didymus and the beyond-gorgeous Ludo).

One film that’s always amused me is the Lucas-produced Howard the Duck.  If I’m honest, I probably haven’t seen it since the late 80s, but I can remember a lot of it very clearly, and I remember that it was kitschy hilarious: what’s not to love about a vaguely perverted, cigar smoking animatronic duck battling a Jeffrey Jones-shaped Overlord from a parallel dimension?  Ironically enough, Howard the Duck received a critical drubbing and the Razzie award that year for Worst Picture… and yet I still like it a hell of a lot more than Attack of the Clones (there you go, I remembered the name!).

I feel like I should give Willow an honourable mention at this point: it’s an ok movie and certainly one for the kids, but as I have yet to forgive Ron Howard for Far and Away and I don’t recall that the story made a whole heap of sense (another black mark against Uncle George… what was it Harrison Ford said? ‘George, you can type this s***, but you sure can’t say it’), I’m going to leave it to you to make your mind up about it.

So, in conclusion: George Lucas – a shockingly bad writer, a truly heinous director, but an ok producer.  And let’s not forget one thing: George Lucas invented Chewbacca, and for that we should be truly grateful.

12 comments for “How I Learned to Forgive George Lucas… And You Can Too!”