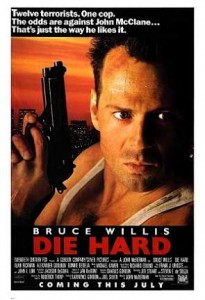 Die Hard is a 1988 American action film and the first in the Die Hard film series. The film was directed by John McTiernan and written by Jeb Stuart and Steven E. de Souza. It is based on a 1979 novel by Roderick Thorp titled Nothing Lasts Forever, itself a sequel to the book The Detective, which was previously made into a 1968 film starring Frank Sinatra. The film was produced by Lawrence and Charles Gordon, along with Joel Silver.

It stars Bruce Willis as NYPD officer John McClane, Bonnie Bedelia as his wife, Holly, and Alan Rickman in his feature film debut as thief Hans Gruber. The film was followed by three sequels; Die Hard 2 in 1990, Die Hard With A Vengeance in 1995, Live Free or Die Hard in 2007, and an upcoming fourth sequel, A Good Day to Die Hard, with a release on February 14, 2013.

Please call in your voice mail feedback by 12/19, so your thoughts will be more timely and topical– you know, like the movies we cover.